What links a shiny bottle of Champagne, a leaking rice bag, a cobbled taximeter and a worn-out football shoe? They all had a role to play in a little story of corruption.

Corruption Objectified is the product of joyful cooperation between the Integrity Forum team, La Transplanisphere and a team of Sciences Po students. They chose to explore the integrity topic in a different way, collecting symbolic objects of corruption associated with their stories. The result is a promenade offered to the audience, a concrete introduction to the multiple dimensions of a stake that may appear (sometimes) so difficult to fathom and so complicated to get to grips with.

What is, according to you, the most accurate object of corruption? Will you find it somewhere among the collection visible here? Please let us know, as we expect suggestions for the next experience!

Link to OECD page about the event. 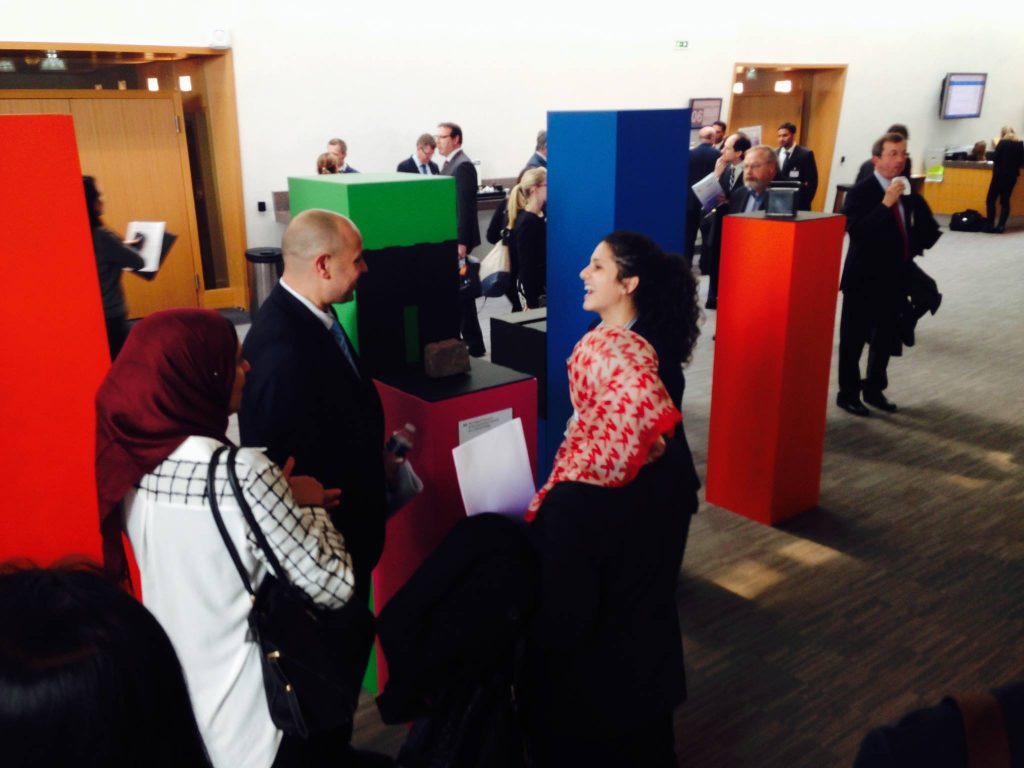 The exhibition Corruption Objectified is a step towards a future European project that wishes to question corruption, co-designed by 6 organisations The experience will associate artistic and civic approaches. It will also be based on public participation and involvement. The partners are convinced that artists and experts have a dialogue to initiate in order to bring creativity in the public debate on the corruption stakes.

Pitch presenting the objects at stake during the exhibition: short stories of daily corruption and fraud from individuals

• The office clerk was offered a fancy dinner for speeding up the administrative process for a construction permit.
• After sharing confidential information to a machinery supplier about other bids, the procurement officer was wearing this hat and sandals during his sponsored stay in a beach house.
• Over 50% of the media house stocks were bought by the politician wearing this pyjama in combination with this bow tie.
• The taxi driver manipulated his meter so his boss would not know he used the company car for his private delivery service. He always had this taximeter in his taxi.
• The nutrition expert cashed his per diem twice after he deliberately lied on his travel claim. This [object] is the souvenir he brought home.

• The police officer waivered the traffic warrant of the truck driver after she informally paid 60 pesos for ignoring this traffic sign.
• This backboard was given to students by the school administration after they paid for the equipment of modern tablets to improve learning methods.
• This brick was part of the construction material for a railroad bridge but was secretly used by the mayor to build a swimming pool in his second residence.
• The nurse used these cleaning tools after requesting an informal payment from the parents to assist with the delivery of their baby in the hospital.
• The soccer player owning this pair of shoes was bribed to shoot an own-goal by the opposing club.
• The chairman who took a bribe in exchange for a vote to award a sports event to a capital city was known for using these skis in his winter holidays.
• The young man carrying these fake glasses has offered bribes to customs officials while shipping counterfeit luxury bags into the country.
• The grocery store made huge profits with selling this counterfeit liquor.
• The refugee who had to pay 500 EUR to get her passport back from the boat owner left this life vest on the coast.
• The member of the recruitment panel used his contacts to falsify the test results so his nephew would get the position of justice clerk.
• This sculpture stolen in a war-torn country was sold to a man who loved ancient art objects.
• The person who inherited these frozen assets used to travel oversea to open up offshore companies to circumvent tax obligations.