The first European Integrity Games workshop (project supported by Erasmus+) took place online from 15 to 17 February 2021. During 5 days, 9 European participants gathered to explore the worlds of blockchains and escape games.

A European workshop to test the first escape game on Bitcoins

As a reminder, the European Integrity Games project aims to create 7 games exploring different topics related to integrity. These 7 games will be created in two formats:
– an escape game to be played in a collaborative group
– a mobile application for a solo experience
From January 2020 to February 2021, La Transplanisphère and Ohi Pezoume worked on the first game tackling the topics of blockchains, bitcoins and money laundering. With the help of some experts and students from Sciences Po Paris, the two partners designed the beta versions of the escape game and the application. More information on the creation process here, here and here.

The aim of this online workshop was therefore to test, in real conditions, this first version of the games and to receive first feedbacks. In a collaborative and collective discussion process, the participants were also able to explore the topics discussed, reflect on possible improvements to the games and train for the role of the game master.

Monday 15 February – Launch of the workshop

Welcomed with music on the Zoom platform, the participants met and discovered each other through ice-breaking exercises.  In a friendly atmosphere, the group dynamic was set up. The participants came from Germany, Portugal, Spain, Italy, France and Greece. After having been introduced to the digital tools used during the workshop (padlet, whatsapp group, Zoom …), the participants discovered the project and the activities that awaited them.

An interactive session on escape games and blockchains then allowed participants to dive into the workshop topics.  With an interactive quiz on blockchains and bitcoins, they started discussions on the subject, fed by an explanatory video. To end this first day and get a taste of the next activities, the participants then got a glimpse of the game’s mobile application.

For this second day, the participants were directly immersed in the escape game scenario. Once logged in, they were told that they were students of Europol – Financial Fraud Section. A new law has just been implemented to strengthen the control of transactions via Bitcoins. They thus have to be trained to deal with situations of money laundering via Bitcoins. For this training, they are put in real conditions and have to investigate a transfer of 1 million euros that risks being laundered. Their mission: to trace the money, so that they can locate and catch the money launderers as quickly as possible!

The escape game was played in a hybrid way, mixing escape game and immersive theatre. Actor Bruno Freyssinet was in the escape game room with the clues, riddles etc. Two cameras were installed: a wide-angle camera that filmed the whole room and a camera carried by Bruno to show what he saw. From these two cameras on Zoom, the participants guided the actor through the room, telling him where to look, what to do and solving the riddles together. To make solving the puzzles easier, all participants had access to a Padlet on which the game master put the visuals of the clues as the players found them in the room. This allowed them to zoom in on the clues and think about them while others searched for other clues, to keep the nested and cooperative nature of the escape game. 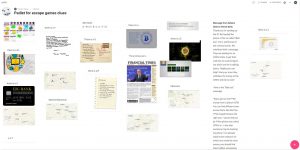 In a collaborative and dynamic spirit, the participants managed to solve all the puzzles and accomplish their mission! A debriefing allowed everyone to give their feelings on this first experience.

Wednesday 17 February – Review of the escape game and the scenario

Recovered from their emotions of the previous day, participants shared their feedback in a collaborative session. Using the Jamboard tool, they created a mosaic of feedbacks both positive and to be improved. A group discussion allowed participants to share their points of view, their analysis of the game and the improvements that could be proposed. This interactive session was very stimulating and constructive thanks to the creativity, listening and ideas of the participants. This creativity was expressed even more during the following exercise: a collaborative writing session to enrich the escape game scenario. Based on the participants’ inspirations and feelings, we reflected on adding videos, audios and messages to reinforce the immersion in the game. 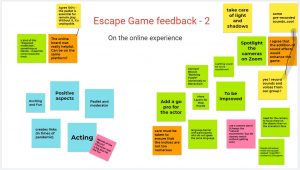 After an energizer reinforcing group dynamics, the participants tested the beta version of the mobile application. Created on the Unity 3D software, this application is the digital adaptation of the “real” escape game. Immersed in a virtual world, the participants were able to wander through the different settings, look for clues and solve the riddles during a solo experiment. A collaborative feedback session then allowed everyone to express and reflect on the different elements of the digital game and the improvements that could be made. 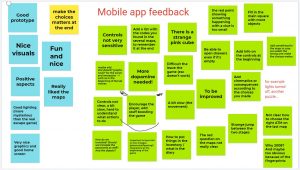 The participants were then trained to become game masters. They first watched a video-interview presenting tips for beginner game masters. In this video created by La Transplanisphère, two teachers from the Scape network (an association of teachers specialised in the creation and animation of educational escape games in the classroom) gave them valuable advice on how to run escape games.

A participant then applied the knowledge and skills learned during the workshop by proposing a small escape game to the group. Installed in her own space with puzzles she had created, this escape game was a very successful experience with beautiful scenery, lighting effects and excellent acting! 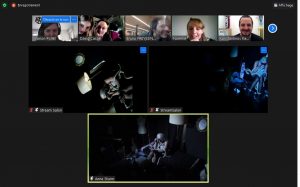 This enriching week of workshops ended on Friday with an evaluation session by the participants. Through an individual questionnaire and a collective discussion, the participants gave feedback on the quality of the workshop and on the strengthening of their own skills. The project was then presented to a few external people in an online event, during which the workshop participants shared their experiences. 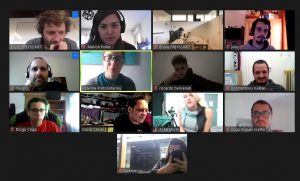 “It was very interesting to me to immerse in the mechanics and the function of the game and listen to the other participants’ points of view as well. These procedures help me a lot as a creator, facilitator and participant in other situations.”

“I really enjoyed being part of the development process. I also had a chance to meet and engage with a new social set that included a wide variety of ages.”

“It was a wonderful experience because I learned a lot and I’ve met wonderful people you work whit very well. I’ve increased my level of English and I really enjoyed my self being in this group and doing the proposed activities”

“Really nice experience, very useful for people who are interested in participating in and implementing this kind of collective creative structures.”

“Testing things that others have created and practising in thinking critically and providing constructive feedback is very useful for me, both as a creator and as a person who really wants to be part of collective creative processes. It was a nice experience of inspiration and collaboration. I got many stimuli that I intend to apply in my work!”

“Haven’t you met these guys yet? Don’t lose them next time!”

For their contribution to the creation of the escape game, we thank :