europefiction 2.0 – Virtual Europe within your reach

Inviting 150 young people to imagine the Europe of tomorrow through artistic creation is the ambition of europefiction.

– Testimony of Quentin Pihou, participant of the project (Lycée Schweitzer then student at Sciences Po Lille) –

Gelsenkirchen, Germany. I remember the first tents being raised in the sun of July 2019. From all over Europe, 150 young people are joining the europefiction camp for its first-ever European edition. From Hungary, the United Kingdom, the Netherlands, Italy, Germany and France, we all share a common passion for art and theatre and a desire for a sustainable Europe. 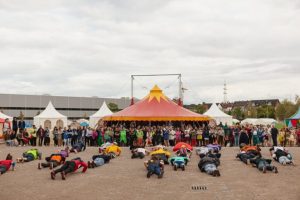 The first “europefiction camp” was a great success that gave us unforgettable memories. But the upheaval of the coronavirus hits Europe in 2020. Different scenarios are imagined by the organising theatres to adapt to the virus. In the end, they decide with regret to cancel the physical event. Disappointment is huge for them as for us, the participants. However, the idea of another proposal is taking shape. We can’t gather? It won’t stop us!  Let’s try to be together without actually being together!

I look back on last year. Germany, the July sun, the European village, and the community life that was being built, each group bringing its own contribution to the common project. This concept must remain at the heart of the europefiction experience.
One of the partners of the project proposes ToToGo, a smartphone application, still in a test phase, developed by the Berlin studio Nebelflucht GmbH which creates educational apps. The designers of the application are interested in europefiction to test with us a multi-site European project.

The idea of an encounter that is both material and virtual arises. The approach is innovative, it is for us to co-write, together with all the participants, a story, some missions, challenges, games in the cities of each partner. Everyone contributes to the conception of a sort of “hare and hounds game”, a collaborative and artistic treasure hunt. The application allows us to create together an immersive day that will take place simultaneously in each partner’s city. 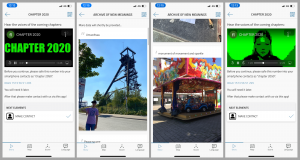 – “Back to the future” mission on ToToGo app –

Success depends on everyone’s involvement. And the challenge has been met!
On 8 August 2020, from Bochum to Rotterdam, from Dortmund to Paris-Le Raincy, from Hesse to Bologna, from Hamm to Gelsenkirchen, dozens of young Europeans experience a common adventure. We play and create simultaneously despite the distance. This example of European cooperation shows us that “coronavirus” borders do not discourage the new generation, which is even more eager for encounters, discoveries and interculturality.

For our group from La Transplanisphere / Schweitzer High School in Le Raincy, the day starts with a general gathering at the Maunoury Park, behind the Town Hall. At noon, our group joins all the other participants in a euphoric “Zoom meeting” where I relive the thrill of last year’s camp. 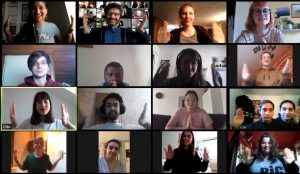 – Reunion of europefiction participants on Zoom –

Back together again! After a year, many new faces but at least as many as we recognize. First online experience together, a “warm-up”. The idea is at first disconcerting but we take part in it under the astonished eye of the passers-by. The European mindset resurfaces, the concern of the other’s gaze disappears, replaced by a benevolent acceptance. Then comes a solemn word from Manuel Moser and Inga Sponheuer, the project coordinators. For me, this moment echoes with emotion that of the previous summer.
We discover our mission “Back to the future”: friends living in the Europe of 2060 ask us to act today to influence their lives. They are asking us to make sure that the “chapter 2020” of European history, the days we are living in right now, is heading in the right direction to avoid dramatic repercussions at the time of the “chapter 2060”. A scenario worthy of a science fiction film! 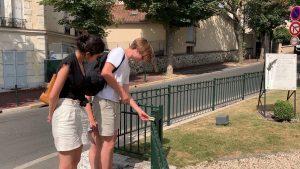 We roam the streets of Le Raincy, its park and its suburban alleys in search of material to feed our reflection and our artistic creations. What does the Covid-19 crisis reveal about our societies? Should we take the path of solidarity or asceticism? What place is there still for luxury and sumptuousness in a world where necessities are less and less obvious? We leave a trace of our visit, a letter to whoever wants to near the city’s war memorial, drawings evaporated in the town hall square, portrait photos Place des fêtes, we meditate in the calm of the library’s garden. Our works are published on ToToGo. We look at the proposals made by the other participants in Dortmund, Rotterdam, Bochum… Our journey takes us to symbolic places that embody both the future and the past: the Biocoop of Raincy on one side and its cemetery on the other. 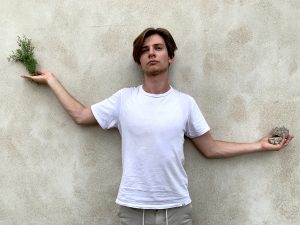 In the end, we all gather online, behind our screens, and as strange as it may seem, something of the festive atmosphere of Camp 2019 can be felt on this summer evening in 2020. There is music, smiles, we even dance to the same music via Zoom as casually as possible. The atmosphere is surprising but we soon get caught up in the game and the exhilarating thrill of the party joins the nostalgia.

That day at Le Raincy, we were a small group, we spoke the same language and we were part of same Europe. However, we know that we were not alone and that other young people all over Europe were having exactly the same experience. How can we imagine a more meaningful metaphor to describe the Europe we want, a space where everyone can find some “common” despite distance, differences and tensions? An intercultural Europe where living together transcends populations and brings together diversities around innovative actions. This initiative brings hope for Europe, that of seeing it one day write its “Chapter 2060”. 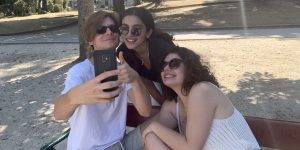 – Group of participants from La Transplanisphère/France –