europefiction – Interactive audiowalks on the tracks of the new world

As part of the europefiction project, La Transplanisphère invites you on a sound and musical journey on the tracks of our new world…

The young French participants in the Europefiction project, in collaboration with the participants of the KJT-Dortmund Theatre (La Transplanisphère’s partner in this project), will co-construct an audio walk in the streets of Le Raincy (93) and Dortmund. Guided by Noémie-Laurens Besace on the French side and Linda Thaller on the German side, they will also be supported by the artist Ambrus Ivanyos from Meet Lab (Budapest, Hungary), who specialises in the scripting of immersive experiences, installations and games. 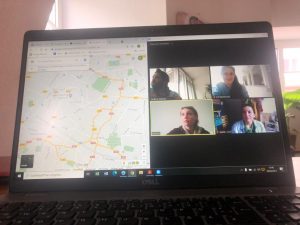 The two paths will echo each other, like two parallel worlds within the same mythology. It is the mythology of our modern world, post-crisis, post-pandemic, which this young generation is seizing in a surge of hope.

Inspired by the Songlines, coming from the Australian aboriginal mythology, they will explore the urban space in order to trace different paths that will shape the initiatory journeys of their heroes. Each life path will intersect. Thus, the travellers, in Raincy as in Dortmund, will be able to branch off from their itinerary at will. They may decide to continue along one path or take another. These intertwined narrative schemes offer a more interactive experience to our listeners/travellers. 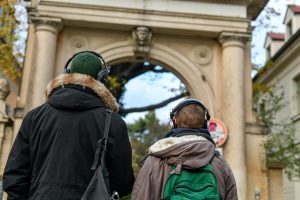 Picture of the project How to Disappear Completely of Ambrus Ivanyos and Bálint Tóth, by  Sebastian Hoppe

In a first weekend workshop, the participants will explore the urban space in search of significant or unusual elements to mark out the paths. In this way, they will create the interlocking itineraries of the audio walk. Then, during a second weekend, they will work on writing the different stories. 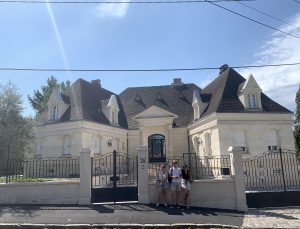 Afterwards, they will be assisted by an artist musician to create the soundtrack and background music for the audio walk. As the principle of Songlines is based on the idea that the gods made the world real by singing, the creation of music will be a particularly significant aspect of the project! 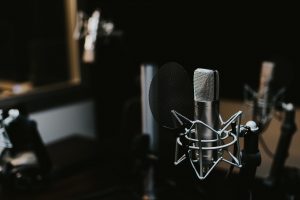 Image by Pexels from Pixabay

Finally, in the last workshop, they will learn how to upload their creation on the Story Dive platform with its team Fabian, Sophie and Lenja.

A complete programme, which allows participants to be creators from start to finish of a project, in its conception, writing, realisation and production!

Launch of the audio walk: July 10th 2021 during the Digital Summer Camp Europefiction!

Associated theatres of the project